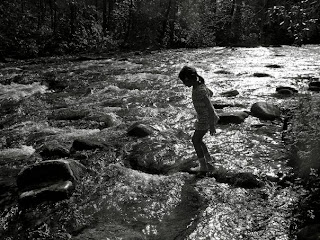 Three Poems: December 15, 2012   The Swan On the first night my baby was not in my body she lay in a plastic basinet next to me in my room. Bundled, she looked like a sweet date. I lay in the pale lit room and I traced her features with my eyes, sketching her in my memory, recognizing that this is what it means to make a person; it will be someone you’ve never seen before and would change into anything to protect. I reached my hand to the plastic’s rim and lay it gently on her chest, through the blanket, through the hours that would complete her first rotation of the sun. I understood from now on I would be in direct competition with every harm that lives in the world. I would grow great wings invisible to any but her and me, and I would cover her when something terrible neared and I would hiss. The clock on the wall also became something more real to me. Until then, I had been waiting for her to come. Now every second was another of her movements away from m
Post a Comment
Read more
More posts