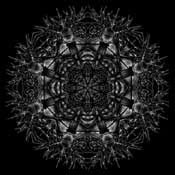 There are two worlds, that of form and that of emptiness. But the emptiness is never stagnant, nothing is every hollow. Everything in it, rather, is constantly filling with every shifting spirit. The more we can surrender to the world of emptiness, the less stressful and anxious we become. We become attuned to Vidya, the sanskrit Ultimate Reality, and the world that, as Paul writes in "Epistle to the Thessalonians," God hides from the unrighteous. Many of us in the "West" know this world--the world of mindblowing coincidence and flagrant interconnectedness. This is the world alluded to page after page in the Holy Bible as well as in Buddhism. Many of us are already living in Ultimate Reality and doing our level best to put up with the nitpickiness of the delusional world. Many of those whose lives "we," meaning the progress starved West, never made the mistake of leaving it. Many still know all the bullshit we call progress is totally delusional and is the very "sin," (off the path) we preach against. The literature of the Ultimate Reality didn't ever stop getting written in Europe and America, though, even if the Bible got hijacked by materialists 2004 years ago. Poets have been writing it, and knowing exactly what they were doing provided they had contact with the masons and rosicrucians (of which Shakespeare is called "The Mask").The poets who have lost touch with the fact of Avidya/Vidya and from whom the dual creation described in the "Epistles" was successfully kept never lost touch with the primordial mind, the mind that perceives the ultimate reality. Nowadays we reduce the most wondrous phenomenon to literary terms: metaphor and simile. These are techniques not only for talking to God, but describing it as well.

JLH said…
Compassion and understanding are both giving life to your lovely blog. What I especially like (and my Google Reader has just today delivered a packet of three posts, so I've had a fast ride) is the compassion you show to the reader, by not expecting anything but an open ear and heart. I say this because some who speak to increasing a person's spiritual depth have an implicit snobbish assumption that unless you the reader/hearer are already familiar with [this concept] and [that concept] you needn't bother. YOU say to the reader, consider this, look inside, accept inspiration, begin here! In addition, your belief that all ways are leading to and inspired by the same source rather than giving credence to one tradition. Or,as the young people say, "It's all good."
Thank you for your blog. I hope you had a good Palm Sunday, April 1, spring Sunday.
4:27 PM