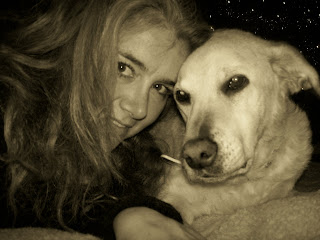 On Tuesday morning at 7:15, just a little bit before my daughter's school bus comes to pick her up, Zoe and I said good-bye to each other, ending our 13 year partnership in this world. Her death ended a three month battle of me against her death. I fought like crazy, turning my back on two suggestions by her vet that we "do it now" and compiling an array of medicines, holistic and non-. Antioxidants, vitamins, drops, iron, vitamin E, prednisone, nausea pills, painkillers. . . and I was feeding her "dogsure" with a syringe. Death has been living in my house, pacing. And now it's gone.
The way she died mystifies me. I was holding her as I have done so many times, my arms wrapped around her neck (by now so skinny) and my face buried in her fur. I had never visualized how she would go. I only feared it and wept for it since the vet told me in November he'd found cancer in her liver. But when the moment came, when her breathing changed, I talked her through it. I did it unconsciously--and my voice was calm and strong. I was saying all her favorite sentences and words--ride in the car, go to the cottage, get in the boat, go for a walk, have a treat. . . and her breathing grew heavier, and for the first time in her life she growled as she released her last breath.
And then I brushed my daughter's hair, zipped up her coat and walked with her to the end of the driveway where bus 181 picked her up and took her to school.