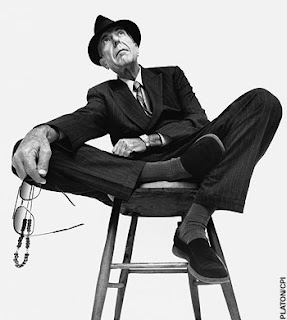 Well, last night Leonard Cohen played in Asheville. I drove into town a few hours before the concert, approached the front desk at the Haywood Park Hotel and said, "I have a present for Leonard Cohen" and the concierge saw my book and said she'd have it taken to his room. I sat down on the comfy sofa and wrote in it: from one Canadian poet to another. . . thank you for your song. . . with love, Laura Hope-Gill. Then I handed it to the woman and presumably someone took it to Mr. Cohen.

How do I describe this? Leonard Cohen has been such a profound influence on me. His poetry, along with Galway Kinnell's, has shown me how poetry can move the mind through darkness, lighting it as it goes. Yes, it's a wonderful gift for poets to be able to describe what is and even what is inside what is. Then there are these poets who go even beyond the what is and still find something there. Cohen and Kinnell are among the living who do this, and The Soul Tree is rooted in this kind of work, moving associately through the music, letting it be the guide beyond reason. . . .

I remember the first time I really listened to "Take this Waltz." I was stunned. It's a poem comprised of images which share a tenor, a concept desiring to be conveyed. He encloaks some forty or so images within a metaphor of a waltz, conveying an emotion of such complexity only music can carry it. It's wistful and bitter, alive and at the same time dead.

It was a powerful moment for me, as a poet. Since then I've looked at his lyrical logic, how he weaves emotion from forms. If Mr. Cohen just opened one page of The Soul Tree last night before he went to sleep after an earth moving three and a half hour concert, I'm the happiest poet on earth.