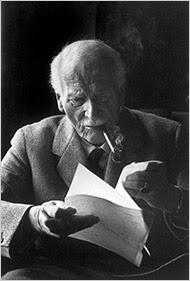 Last week I went into Malaprops with my daughter. We had some time to browse prior to a reading I was doing at Posana. I bought some Moleskins for a workshop group for the following day, some pens. I bought my daughter a pair of journals, one for her and one for a friend. I was paying for it all when I saw it. The Red Book.

The secret book by Carl Gustav Jung, sealed away in a chilly Swiss bank for a century and now sitting before in all its red immense glory, beckoning to me. Not saying "buy me, buy me, buy me" (though I knew I would) but rather "open me, open me, open me."

Let me tell you a thing about me and books.

When I took a group of my boy students (as their teacher at a boys' boarding school) to go see the Dead Sea Scrolls in Charlotte five years ago, by the time I exited the exhibit, they'd all found new girlfriends and had bought them sodas. I had spent that long looking--no: gazing--into the strange cases built to house them, complete with low lights on timed dimmer switches so the paper bears the weight of light, and sight, for only seconds at a time. I swear I wanted to see every stroke of whatever language they were written in. Not that I could read it, but I know there's power in the word, and there's greater power in words written in that metastate of illumination.

"What are you?" I whispered to them, under my breath, but no low enough for the Rabbi standing near me to hear, close his eyes and nod very slowly in agreement with my awe.

I don't take these matters lightly.

So, there was the Red Book. "Please," I said, unable to complete the request. And within a moment, this enormous book was under my hands. I touched it first, much in the way I touch a horse as I move alongside its enormous body, toward its face, careful not to startle it, careful to let it know I"m here.