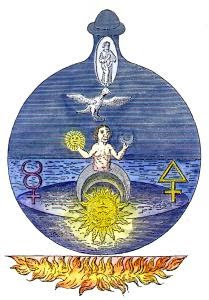 First of all: thank you Adam McLean for use of Barchusen's above version of The Crowning of Nature (http://www.levity.com/).

Coagula et Solve. One of the basic tenets of alchemy and of life. But geezh we don't hear about it. It basically means that human life is constantly moving between two states--one of being firm and structured and another of being all hell broke loose. Once we max out on the former, circumstance moves us back toward the latter. We coagulate--come together. We dissolve--solve.

Solve is a state of destabilization--a change is moving through life so we have to loose our preconceptions of what must be. That is, if we are going to survive it.

Any paradigm shift is a movement from coagula (a fixed set of ideas) through a solve and back to a coagula.

Today, I have been in solve. Sometimes solve just happpens. It doesn't always take a massive surface change in life. On the contrary, change begins always deep below the perceptible surface, but we can feel it coming. And we respond by, whether we like it or not, loosening our hold on things.

It's hard to be in a state of solve. When I'm in it, I want to change things, nail things down, name the thing that's happening. But I never know what's changing, only that change is coming. At such times, I know, it's best to avoid major purchases or drastic alterations to my appearance. Today I found myself looking at office space on the fourth floor of an office building. The view was incredibly--way high over the mountains to the North. But you know? All life is a metaphor. I don't know if I'll get it or not, and that's not the point. The point is I was moving to higher ground. Something is afoot, so I felt instinctively the need to grow wings.

Thank you for this blog. Yes, it stirs deep currents, these images which speak a secret language. Much more than mere echoes of Egypt ... Synchronistic with something I encountered today: came across some notes of a conversation I had several years ago, when I was way into "solve." My teacher said, "congratulations," and I laughed.

There's much more to say about these two states and the nature of beauty.

Jasleen Kaur Gumber said…
Such few words and such contrasting impact, your piece just stirred 'something' inside me.. what exactly, I don't know!
Love your entire blog to say the least.
You are a director, I read.. and help the budding poets; do visit my page, its open to criticism and improvement!
I would be obliged!
11:30 PM