Diary of a Fascination 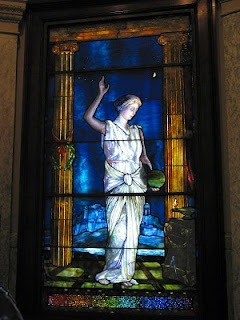 I get fascinated with things. Constantly. Lately, I've been fascinated by a story, an Asheville story. It involves a woman who lived nearly a century ago. Her name is Mary Tillinghast. She was a stained glass artist who was hired by architect Bertram Goodhue to create windows for Asheville's Trinity Episcopal Church in 1912. I stumbled upon her name while writing an essay about the church for my current writing project (read: obsession) on Asheville's architecture.
When I took on the project I had no idea how deeply it would affect me. After all, they are buildings. I thought I would learn the vocabulary and take it from there. But no. Something happens when we learn the vocabulary. Its whole history sort of grafts itself onto the psyche through the words. It is as though the buildings want to speak and now that I've engaged them in conversation they virtually throw stuff at me to write about. In the case of the Trinity Church, what got thrown was the name of Mary Tillinghast.
What's a woman doing making stained glass windows in 1912, I'm afraid, was my question. And then the next: "Who are you, Mary Tillinghast."
I think we often believe it's the answers that change our lives. But Rilke teaches us it is the questions. My question to Mary continues its own asking as I am persistently opening doors into this woman's life, and she is opening mine.
This is one of her windows, Urania, located at the Allegheny Observatory in Pennsylvania. This woman was an artist, a contemporary of Tiffany and John LeFarge, both of whom she worked with or for. She even became business partners with LaFarge, then she sued the company and started her own. Unmarried, deeply talented, whipsmart and born into money, Tillinghast had a way with glass that I think neither LaFarge nor Tiffany (and his countless workers whose names have melted away under his own) come close to touching. Certainly each of the three, the veritable triumvirate of 20th century glass making, has his and her own aesthetic. I went to the Morse Museum in Winter Park, Florida last week to see the Tiffany glass and to see if the curator knew anything of Mary Tillinghast (she didn't). What I saw was a sort of beauty that doesn't quite escape the object. In Tillinghast's work the beauty does escape the object and enters me, illuminating me.
Tillinghast's windows at Trinity have been taken down. I learned tonight that they were in such horrid condition that they fell apart or were broken apart and six-inch pieces were either sold or given to parishioners. I've read her letters, detailing her experience of making them. And I want to see them whole again. I know this isn't possible.
But I am beginning a quest to find the six-inch pieces of the windows. I want to touch them.

Lara Lynn Lane said…
What a beautiful window. I think of the old century women who were intense students and profound creatives. Sometimes in their poetry about the classics and mythology they were also telling their own stories.
7:53 AM