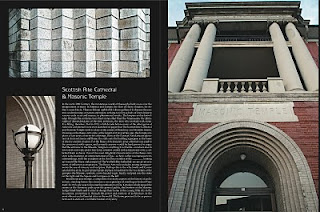 It's a bit too much of a dream come true. I've had dreams about this place. I mean, really. However it is possible to geo-locate where dreams take place, I have woken knowing I dreamed about the darned Masonic Lodge at the corner of Woodfin and Broadway. Of course, in my dreams it has all these secret rooms and magical walls that disappear when you say certain words, and walls within walls, thin spaces revealing entire secret universes. So, when the mountain xpress published photographs of the interior hall--now available for rent for public events--naturally I was a little dismayed. Granted, the room with columns painted with scenes of King Solomon's activities is mighty cool, but in my dreams, well, they would have been holograms.
But, here it is. The post-Masonic age. All the inside secrets have been let out in one way or another. Some books are weirder than others and some references stranger than others--from writings about Oumros, the strange black powder sought after for centuries to Kubrick's Eyes Wide Shut (with hints of the final scenes of Requiem for Dream just beneath the surface (shudder) and Dan Brown's Lost Symbol which did go into some interesting places architecturally, though didn't quite finish its sentence regarding "the Word" and how it relates to Masonry.
I've been afraid that the Lodge would just fall away, given that it seems to have fallen into disuse, and its location is a bit odd. . . it could easily have become prey to developers. But, thankfully, no.
The Masonic Lodge is going to renovate and restore this beautiful building, and groups are invited to hold events as a way of helping to pay for the project. A wonderful way for the arts to help architecture. I'm in. (I think they're also hosting dinners on the first Thursdays of each month but not sure.)
The Masonic Lodge Scottish Rite Temple was built in 1913. That's 13 years before the Jackson Building went up. It was sort of a harbinger of what Asheville would become in the next decade. In 1912, "three initiates" had published The Kybalion, a releasing of Hermetic Alchemical principles. This was in time with the whole Theosophical Society rise in the states following World War I and subscribed to by such lovelies as Harry Houdini (who performed at the Kennilworth Inn. . .) and, later, Elvis. Also, at around the same time, Sharp Smith built the Masonic Temple on Market Street, which housed the nation's largest African American Masonic Lodge. So, anyone thinking the Masons have always been just the powerful white guys can dig a little deeper into history.
It is wild to think of Richard Sharp Smith pulling out all the stops, as he did, for this building. He's got a full-blown Beaux-Art vocabulary--columns, arches, balustrades, bas-relief, ornamental stonework. . . not to mention tilework, including the square and compass mosaic on the ground as you walk in. Richard Sharp Smith was an all-over-the-place architect, true to his time, a moment in architecture (1900-1919, as Witold Rybszynski writes in Looking Around) when really all everyone was doing was toying with old forms with new materials. Sharp Smith is the wild man of his age--his work in Asheville ranges from:
--the tudor style/pebbledash signature buildings of Biltmore Village and Estate and YMI
--the Arts and Crafts style of the Annie Wright House in Montford (He is credited with bringing the Arts and Crafts to Asheville)
--All Souls Cathedral (big Gothic)
--the Chicago Style of the Loughran Building (Mobilia on the first floor), which was, by some accounts, his final work in Asheville.
--Hopkins Chapel AME Zion (little Gothic)
--the Spanish Romanesque with Guastavino of the Basilica
It's not easily possible to point to a building by the Asheville architects, with the exception of Ellington, and say "that's such a ________ building." This is because the architects, like architecture itself, were more interested in exploring than in defining anything. Even in Ellington's work, his style is defined by exploration. He had merely found a language for exploring, while his contemporaries were using the language of their forebears--a little Gothic, a little Romanesque, a little Neoclassical. Richard Sharp Smith's architectural fingerprints are all over Asheville, fingerpainting the city with all the styles available to him.
I think it's great that the Masonic Lodge is getting restored and that artists can help.

Lara Lynn Lane said…
Up here in Bridgeport, CT in the new millennium artists have given new life to the old Remington Arms Factory Building. Where once lead was dropped from the turret top to the floor to be made into balls/bullets, now it's paint dripping into tools of mass communication.
9:20 AM

Laura Hope-Gill said…
Very coo, Galileo. Thanks for telling me!
9:34 AM

joven said…
hi, you have nice blog.. u can view also mine..http://akoniwares.blogspot.com
9:45 AM