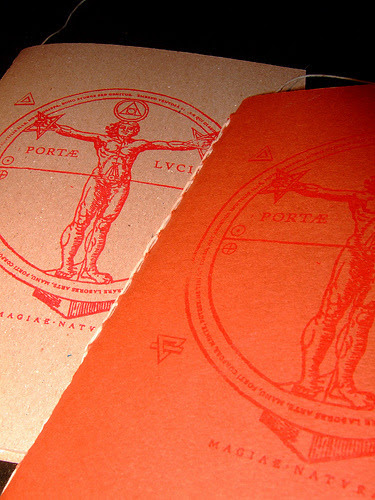 (image from steed griffin, cryptotypographer: http://steedgriffin.tumblr.com/page/2)
Every now and then, a piece pops up in the news that helps me connect a few dots. Today's piece is the article about Gunnar Samuelsson, a quiet minister from Sweden who has spent the last several years trying to figure out where we got the idea that Jesus Christ was crucified. His conclusion: the word "stauros" that has been translated for more than 2000 years to mean "cross" denotes any variety of long wooden objects. This resonates with an exhibit I saw a few years ago of various artifacts from Biblical times. Among the remarkable objects was a part of a human foot with a metal spike driven through it attaching it to a piece of petrified wood. The tour guide pointed out that this is the only found evidence that human bodies were nailed to wood as a form of torture and execution. I remember wondering how that can be possible if crucifixion was the number one favorite form of execution at the time in question? Wouldn't feet like these be everywhere? I couldn't find any answers at the time.
I have seen such wonderful and inexplicable things that I know there is more than meets the eye at work in things. As a poet I've always been hesitant to just dismiss the Bible as something "written by a bunch of men." But at the same time, for a long time, I had such trouble accepting that a book filled with such wacky statements as "spare the rod, spoil the child" could have anything to do with what I was experiencing. But I couldn't dismiss it. I held to the belief that there must be another way of reading these things that would make it all resonate with what God is not just in one narrow group's view, but, for me, all the views would at some point come to reflect the One thing.
When I started reading The Dictionary of Alchemical Imagery, I started to see. Later, I read Jung's symbologies and from there it all really started to make sense. What remained was the historical notion of Jesus' death. . . if the other alchemical books were accurate, then the crucifixion is a metaphor for part of the alchemical process, the bad part. The really, really bad part. "Crucifixio" it is called, or "mortificatio." At this stage, whatever matter is in the crucible is completely obliterated. If the matter is ourselves in the crucible of our lives, we are obliterated. And then we go through a period of "putrefactio" (ew) and from that state we emerge anew. This emergence is called "resurrectio" and "fermentatio." Water into wine.
Jesus in all of this is a man who goes through the alchemical process:
born: "calcinatio"
baptized: "dissolutio"
separated from community: "separatio"
unified with community: "coniunctio"
killed: "crucifixio" or "mortificatio"
placed in a tomb: "fermentatio"
brought back to life: "resurrectio" or "fermentatio."
It is what we all do. All the time.
I do believe there was a Jesus and that he was an alchemist, an adept, and that the genre of alchemical writing gains a wonderful new shot in the arm in the telling of stories about this figure (much in the same way that Plato tells stories about his adept teacher, Socrates). The stories are about alchemy, about the spirit within matter, a concept we know today as Gaia Principle, and ways to work with this spirit. It's all very beautiful to me.
Samuelsson's work points out that the use of the cross doesn't appear in Christology until the 2nd century. This would correspond with the flourishing work in Alexandria, work that would get squashed one century later. I believe it was when this new way of writing alchemy emerged, not just as history of one man's life but as a beautiful vehicle for upholding that man's life as a vessel for alchemical teachings. And what better way to get a story to convey alchemical teachings than to embed the very structure of alchemical opus in the narrative?
The full article about Samuelsson's work can be found at:
http://www.aolnews.com/nation/article/little-evidence-jesus-died-on-a-cross-says-swedish-scholar/19530666?icid=main|main|dl1|link3|http%3A%2F%2Fwww.aolnews.com%2Fnation%2Farticle%2Flittle-evidence-jesus-died-on-a-cross-says-swedish-scholar%2F19530666

WoodSlicker: Nature for Those Stuck in NYC said…
OUr interests here are intersecting.
I just blogged about Jesus as a matter of fact, and I find your blog very informative. I'm enjoy our unintentionally collaborative exploration!
Happy blogging!
Yours,
http://theideahole.blogspot.com
10:01 PM

John Webb said…
I came across your page while Googling for something else.

According to Joseph Campbell, who tends to follow Jung, the image of a crucified divinity on a cross was part of the mystery religions of Orpheus-Bacchus. Campbell has a photo of such an image in one of his books.

Jung himself says that the earliest depictions of Christian art show Christ, not crucified, but with hands open. Jung also notes that religious crucifixion was practised in Germany and Middle America. The priest himself isn't crucified, it's some poor sacrificial victim.

The best Jungian viewpoint is that the cross is a numinous symbol. We don't need to understand what it means intellectually. The symbol should appear spontaneously, in dreams, or in coincidences in real life, in the course of the individuation process.
7:54 AM