Reflections on Steve Martin's An Object of Beauty 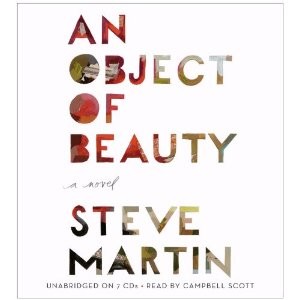 For a book about surface-appreciation and the nature of beauty, this book's jacket-designers knew the cover would be judged. First of all, using canvas as the book cover is a brilliant idea. The print of oilpaint-like quality is a delight. Moving into the novel, the aesthetic appeal continues. Martin's prose is clear both when he is speaking literally and figuratively. His similes and allusive turns of phrase give the novel striking textures in what could otherwise be a not-so-striking read. He weaves subtlety into the surface elements by stretching our imaginations like canvas across the frame.

To increase the license for such figurative speech, he makes his narrator an art writer, Daniel, who, as the Independent notices, functions much as Nick Carraway does in The Great Gatsby. Daniel is the witness who, like Carraway, steps over the line once or twice but for the most part provides a line, if only by doing so. Both men remind us there is a line.

When we think of the main characters of Great Gatsby we think of Gatsby and Daisy. Similarly, the focal point in The Object of Beauty appears to be Lacey Yeager. But in both works, the narrator is the one controlling the information. Seemingly innocuous and apparent instruments of narrative, the narrators in both works bring their own baggage with them to the story. In a novel about objectifying beauty, the Daniel undergoes a similar transformation as Lacey, learning the value of slow time in love, breaking below the surface distractions of desire, thereby embodying the narrator in the narrative and making him the embodiment of novel's theme.

Similarities between this book and Gatsby reach beyond narrative strategy and figuration. Martin indulges his own Fitzgeraldian bifocals to witness both the elegance and the grotesqueness of the New York scenes. In the sympathetic character of Patrice, we see the genuine lover of art. One of his many counterparts, Mr. Alberg, comments "Collector is too kind a word for me. I'm a shopper." Then the latter tells, and tells again, a tale about a Joseph Beuys' "felt suit," the reader feels much the same as when reading of cruel Tom Buchanan's mistress' blood dripping over a fashion magazine in the hot, second chapter hotel room. Martin's eye roams the aesthetic spectrum, counterpointing artworld stimulus (much of it beautiful) with artworld behavior (much of it not).

Lacey embodies Daisy and James Gatz both. As he showed us with Shopgirl, Martin studies psychology and personality. Lacey is a narcissist to the nth degree, as Daniel shows us. But of course could Daniel be missing a part of the story, leaving it for the reader to tell? This is where Martin's ability to create and captivate really comes into play. We all know girls like Lacey, have been destroyed by them. ("She's the kind of person who will always be okay," says a character undone.) We also make excuses for them, which is something that Daniel does not do. Daniel witnesses and wants but does not judge her, except in the way he subtly compares her to money, shimmering, fleeting.

She is compared to money much in the same way that Daisy is. Daniel doesn't comment on any of Lacey's inner life because, like money, she has none. But both Daisy and Lacey have stories shaping them from within. The absence of Lacey's story makes the reader as susceptible as the book's other characters to the too-quick evaluation of "an object of beauty."

The Great Gatsby would not have its thrust and balance without the fireworks-less pairing of Nick and Jordan. Martin builds a similar figure into Object of Beauty. "We could talk for months," says Daniel of his relationship (details witheld). He describes his love interest as being the only person with a normal upbringing, which renders her impervious to Lacey's "full courtship press" of the art world at the moment when it really matters. This slow-and-steady approach to love mirrors the low-key attention of the true collector, rather than the minute-makers who create fame out of novelty.

The "series of successful gestures" which Nick Carraway sees in Gatsby's life is also evident in Lacey's. And in both stories, there comes a point at which things fly out of our control, regardless of the perfection of our gestures. Had it not been for the hit-and-run in Gatsby or the sub-prime loan crisis on Wall Street, our narrators would have different stories to tell, stories of unhindered rises from reality into dreamworlds. The setting of Martin's book makes the reading strangely less intimate than that of Gatsby.
If Fitzgerald's novel was prophetic, Martin's is deeply reflective, exploring the great WTF all economies still feel the effects of, and even going so far as to stitch a narrative, however at once literary and economic, into a chaos. What redeems Gatsby is the truth: that it was never as beautiful as he thought it was. But in Object of Beauty, even in a world fallen to pieces in so many ways, beauty is indeed a redemptive constant, and while the word itself might get dropped from our vocabularies in service to some fashions, Martin asserts it does and always will exist. We just have to be broken from time to time in order to recognize it and allow it all the way in, if only in order to find again a line within ourselves we don't allow ourselves to cross, ever again.