Black Swan: Alchemy in a Tutu 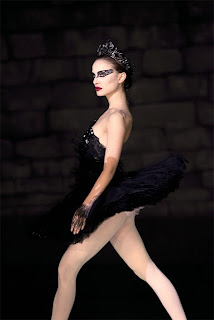 For any mother who has taken her daughter to ballet classes at the local studio, the irony is evident. We hand our daughters wands and tiaras, while in the waiting room the mothers talk of all that goes on in our adult lives: husbands who have returned from war with deep psychic wounds, struggles with jobs and the efforts to keep a house (either clean or from going to the bank). Meanwhile, through the large plate-glass window, our daughters leap and twirl, engaging dreams of princess-ness. The dichotomy of girlhood and womanhood is clearly pronounced.

The film Black Swan draws on an ancient motif. The whole goal of the alchemical process is transformation through a slow drawing forth of the "active feminine," or "mercurial," principle from within matter. It is the "dark nature" that dwells within things, including the alchemist, and once the "soul" of matter is released, the soul of the alchemist can work with it and make new things come about. Nina, the obedient, girl-like woman alchemizes herself in this film. In the process, she must encounter and grapple with her dark-side, her own dark feminine nature and bring it to light.

It is, as Aronofsky's film shows, not an easy process. It is about much more than technique, which only serves the surface. It is a dance with oneself: dangerous, terrifying, in some cases deadly. The opus contra natura, this "work against nature (nature being the surface appearance of things which hold us captive)" is the theme of the original metamorphosis stories of Ovid, a theme that reaches into all cultures, all mysteries. Most familiar to us, it is a theme prevalent in fairy tales. The Little Mermaid, Cinderella, Sleeping Beauty all encounter their dark feminine sides, be it in the form of a sea witch, a closed cell or a vine-encrusted sleep in a castle. The darkness consumes, draws the girl into an unconscious state where she must do battle. True love's kiss not withstanding, it is the girl who must go through the darkness. Ovid shows that the metamorphosis is sometimes successful, but most times not. Daphne turns into a tree and remains a tree. The Sybil becomes immortal but forgets to ask for eternal youth. Many things can go wrong on the path to transformation.

In the language of the alchemist, a failed opus is called an "abortion." If at the moment of death, the spark of life does not carry through to a resurrection, the matter in the crucible, the "child," remains dead. Success requires a "diuturnity of intense imagination" and also a disciplined balance within the mind of the alchemist wherein he or she is at once consumed in the process and separate enough from it that the boundary serves as what Robert Frost terms a "stronghold."

Nina's star-turn as both the black and white swan reaches perfection. It is a dance of life and death, the loss of self sacrificed to becoming new. There is a great power in the swan metaphor. A bird both graceful and violent, an embodiment of all we are and hide from.