SCATTER WHEELING: SWANS OF THE INCOMPREHENSIBLE 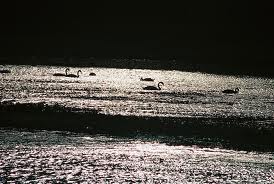 The Wild Swans at Coole as Yeats saw them, too.

I woke up this morning to a clouded over moon and news of a new war, this after a week of earthquake and following fifty nuclear energy workers as they strive to save the world. The vegetables are already contaminated, and the people will get sick from this, even if Ann Coulter continues to insist that radiation is good for us. It is the first day of Spring, and it is cold and gray out. It's a hard day to wake to. I read that it was mostly children who were harmed by the bombs over Libya, and Ghadafi simply replies, "Prepare for a long war." I slept so heavily last night. Today, I want to sleep some more. I feel the earth is tired, the people of the world are tired. I feel we all need to sleep. But we don't sleep. We will keep acting, keep trying, keep searching for the words that will balance out the silence of the dead and dying.

I feel all of this invites me to move through the countless layers of grief that tragedy stirs. To somehow address the personal and political past and reconcile it through the present. I wonder if this isn't the meaning I can find, the path to feeling equal to world events.

The world is like a poem: doing things that at first appear incomprehensible. But the longer I spend with a poem, the more space opens up in me to accommodate the complexity. I can accept the many-sidedness, even if it still doesn't make a "rational" sense. I remember the first time I read Yeats' "Wild Swans at Coole." None of it made sense, kind of how the world doesn't make sense to me today.

I pick up the poem today as way of encouraging myself. What was once incomprehensible is now soothing for me, still deeply engaging. I feel my mind expand as I read through, expanding to hold a more complex world than the one I'd much prefer to wake up to. Here's the poem:


The Wild Swans at Coole


When we are faced with something complex, we will almost always shut down our hearts and imaginations and revert to a kind of thinking that insists that things must make simple sense. I can't relate it to Okkam's Razor because the simplest solution may always be the "correct" one but "simple" is sometimes determined on emotional terms, terms we are ill-equipped to access. The razor is sometimes tears and loss. But we will more often call it action and set about further cutting up the world. I remember when first faced with this poem, I wanted to rip it out of the book with my own Okkam's Razor.

There was an intensity, or perhaps a peacefulness, to the language that my 17 year old brain wasn't prepared for. I got lost immediately, sitting in Mrs. Dennis's class where I was usually a bit of a superstar for being able to write well. The truth is that having a poem placed in front of me inspired the same anxiety of walking into math class and seeing the systems of algebraic equations. A feeling of being defeated before I'd even begun. New information, in whatever form, made me retreat.

Over time, though, I've grown into the poem. It has appeared in my life many times, at one point in the context of my growing fascination and connection with swans. I simply wanted to read every poem in the world (in translation) about swans. This one resurfaces.

I can see now that Yeats merely paints a picture in the first stanza: there are 59 swans drifting on the lake.

In the second stanza, he says he'd counted them 19 years earlier, and the birds had all taken flight before he'd finished.

In the third stanza he reflects on how they make him sad now because so much has changed in 19 years, when he "trod with lighter tread," meaning he'd felt lighter in the world, because of youth and because, I suppose, because of how life weighs us down over time.

The fourth stanza shows that he sees that the swans have been unaffected by all that time (poets seldom make allowances for the shorter lifespans of animals: Keats' credits the Nightengale he hears while eating oatmeal one morning with being the same one that's been singing since the dawn of Time). "Their hearts have not grown old," unlike the poet feels his own has; the birds are all still "Passion and conquest."

What happens in the final stanza is, still for me, a rough encounter. As is often in poems, the ending flies in many directions, like the swans leaving the water. Yeats imagines they will move away, "mysterious and beautiful" to delight other "men's eyes." Perhaps he laments them as he laments his waning sex-life, the affection of women. Perhaps he also laments the idea that he will "wake" in a world without them when he dies. The poem's ending is open-ended, as wild as the flight of 59 swans (four more swans than the years of his life at the time he published the poem), "scatter wheeling in broken rings/ upon their clamorous wings." The poem does not seek to resolve incomprehensibility so much as reflect it back to us, the way things really always are.

The things we "wake one day/ to find they have flown away" are the very things of incomprehensibility. A love, a loved one, a world we expect to be the same on Tuesday as it was on Monday. The way that poems end are so often the way that life really is, open-ended, complex, "mysterious and beautiful" and too often terrifying because of this.

This morning, I am overwhelmed with the world. I can only open myself wider to take it all in the way Yeats stood by the shore nineteen years before this poem and tried to count the swans as they flew. He can count them in the today of the poem because they "drift on the still water." He has also known the "bell-beat of their wings." Today is a "bell-beat of their wings" kind of day. A day I won't get a good count.

Yeats penned this poem during World War I, the war that took a generation of poets from the world, a generation of men. He saw it all and too often must have woken as I wake today: astonished, bereft, nearly dismantled by human events I don't even have to touch to be able to experience. Are the swans his friends who are fighting? Are they the general sense of "making sense" that we, no matter what, insist on finding in the world and news of world? Are they everything that changes and that will change? "Mysterious and beautiful." One day: gone.

Yeats would say that he knew he'd heard a great poem when he felt like "taking the sword down from the wall."  I am tired of swords and of things being cut open by nature or by weapons. I am content to spend the day with poems. They bring my swans back to me. Always.

Lara Lynn Lane said…
"Truth is tough. It will not break, like a bubble at a touch; nay, you may kick it about all day, like a football, and it will be round and full at evening."
--O.W. Holmes
6:09 PM