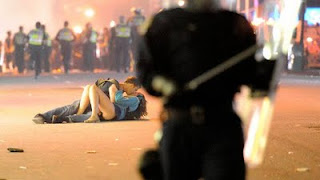 In the land of the esoteric, the tarot deck is much more than a box of thick, richly illustrated cards. It is a practicing ground for symbolic literacy wherein a practitioner "learns" how to "read into" things intuitively. This literacy renders the world a magical place, one where, as Paulo Coelho says, we can see into the Soul of the World.

For the ancient Greeks, for the ancient anybodies anywhere, the world and all that happens in it is living organism, growing, breathing, changing every second.  As a part of this living world, we also participate in the whole. We are affected. We are transformed by experience. (Passive voice fully intentional there.) That is, when we are open, when we have been broken open just enough to let the world speak with us. From that point, with imagination and intuition, we can "see" the world at work inside the world, reflecting on the surface.

So, this photograph. How incredibly well it has captured the very essence of the yin-yang. There is all the fire, all the hardness, all the riot shields, all the rioting. And in the midst of it all, a boyfriend comforts his girlfriend, who has been knocked down (by the police no less), with a kiss.

Scott Jones and Alexandra Thomas, you are beautiful. You are the Lovers in the worldly tarot deck.

For more about them: http://news.blogs.cnn.com/2011/06/18/riot-kissers-tentatively-identified/