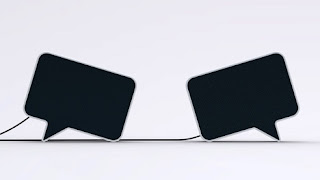 I fell through a bridge into a river in Switzerland once. It was a glacial river. It was a very old bridge. I still don't know how I survived. I somehow climbed a brick wall and passed out in a woman's vegetable garden. I did survive, and I got arrested for trespassing. For years following, each time I heard the sound of running water, be it of a river or a faucet in a kitchen, my hands would itch and often swell. When I went with friends to a "swimming hole" on the Blue Ridge Parkway, I experienced a full-blown panic attack which led to my being carried up the mountain by rescue rangers in a white wicker rescue basket then taken by ambulance to the hospital. All of this was unconscious. My task was to consciously draw this fear of water forth by exposing myself to increasingly dramatic forms of this necessary element.

I think of this "de-fearing" process when I think of Tweeting and Facebooking (and blogging). Public speaking is the number one fear among North Americans. In today's world, it is a daily terror. That is, if someone wants to be part of the online scene. If that fear remains in place, the person holding it will go unnoticed and unheard. Public writing is speech. It is the conveying of what is inside into the outside, audible, legible world.

People who aren't writers are expected suddenly to write. Writers for whom revision and long thoughtful pauses between typographical activity are the long-held practice, are now told that "4-5 tweets per hour" is optimal. That's several poems a day! That's a scene in a novel. But we can no longer get by just on our looks or on how well we perform daily tasks. We have to speak. And in order to speak, we have to have something to say. In the age of digital personality, it just might be inevitable that we find out who we are.

There's the feeling at first that you have nothing to say, that if you type anything at all it will be the wrong thing. It won't be "cool" enough. No one will "like" it. You might say too much, or you might offend someone. What you say might not matter enough to take form in letters stolen from the alphabet. The alphabet! What right does anyone have to take letters from one of the longest living human-made systems on the planet just to share what they are thinking?

As with all fears, overcoming a fear of self-expression takes time. As though the universe is moving us through a new phase of evolution, we are all forced by fashion into group therapy. Sometimes we want to share. Sometimes we have nothing to share, sit back in our chairs, fold our hands, or simply describe what we had for lunch.

As anyone committed to psychotherapy knows, there are many aspects within each person. The more speech, the more discovery. And it's okay to have a number of voices: to be reflective one moment and blatantly brilliant in another, to speak of a real-life moment at noon and to post a critique of a world event at one. Speech is space. There's only one way to create it, though. To gently but boldly move the unconscious fear of speaking (instilled in us from an early age!) forward, to feel the thrill of daring as our fingers type into the world our very own words and ideas.