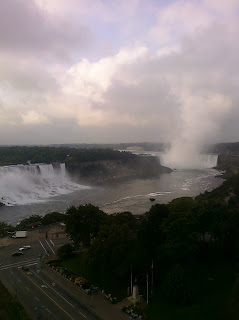 In 1940s movie consciousness, a honeymoon in Niagara Falls was that iconic holiday. The dream destination for beginning a life together, Niagara is the site of a millenia-old geological event. At the end of the last ice age, the newly formed Great Lakes crashed through the escarpment, forging a path to the Atlantic Ocean. Despite its being one of natural wonders of the world, Niagara Falls was commonplace in my childhood. My grandparents lived fifteen minutes away along the Parkway in a Georgian house on the river. We picnicked just above the Falls where a ruined ship rusts away in the current over the decades. "This is my favorite part of the river," my grandmother would say, "just before the Falls." I grew up with one of the greatest natural phenomena just down the road.

When my daughter was three weeks old, I flew to Canada to introduce her to my 93 year old grandmother. We stayed in a Victorian Bed and Breakfast where my grandmother had played with her friends as a child, back when it was a private home. It was summer, and each day during the visit, I took my baby to the Falls. The following winter, I flew north again, and every six months, again. Each time taking my daughter to the Falls, standing above them in the snow or sun. When she was three years old, I started to drive up to Canada each summer to visit my mother at her cottage on Georgian Bay. She's eight now, and each year we have stayed in Niagara Falls for three days. We have stayed at the Econolodge in Clifton Hill, the "strip" where every business is an amusement of some sort: wax museum, lego museum, haunted house, fun house. This year I did something a little different.
While looking at hotel prices on hotwire.com, I came across a "special rate" for the Sheraton at the Falls. All my life, or at least I think all my life, I'd seen the tall hotels directly across the street from the river. They had always seemed dreadfully out of reach, astronomical. I'd always dreamed of staying in one, of having Niagara Falls be something that was exceptional, something one gazes at for hours rather than sees briefly through the car window on the way to Nanny and Poppee's.  I called the hotel to book the special. I asked about the view and learned that particular rate was for a room with no window. A square space inside a building next Niagara Falls. I said no and hung up.
But the first bit of rock had already been shuddered from its place. I called the hotel again asked the cost of a room with a view of the Falls. For a difference of $150.00 per night, I could stay at the hotel I'd always dreamed of staying in. Or I could be smart and stay up the road at a hotel that could be anywhere. I couldn't really "afford" an extra $300.00. I hung up. I returned to work, thinking of my paycheck. How much I work to earn what I was considering blowing. I called again. I booked the room with the view. Then I regretted it. When my 8 year old and I walked into the room and saw the American Fall directly in front of me and the Horseshoe Falls just a little farther up, I stopped.
We moved the loveseat from the wall to right in front of the window, which had a center portion that opened (with a good strong railing). We opened a jar of cashews and listened to and watched the roar. Me and my girl. For about twenty minutes.
Being in Niagara Falls with an 8-year old doesn't mean sitting and staring at a natural wonder the whole time. That first evening we did the fun house, the foam ball jungle thing, the fun house again, ice cream and a walk through the town. At the end of these things, we returned to our room. Rather than it being a come-down from the various defining qualities of being at Niagara Falls, rather than being a withdrawal into the anyplaceness of a hotel room, we walked into a vista. I made a cup of tea and watched the water fall.  Naturally, we slept with the window open. The moisture from the spray entered the room with the sound. Upon waking, I stared. While my daughter slept, I made coffee I drank sitting in that love seat, gazing.

Across the river, I could just barely make out the wooden staircase they rebuild each year, taking people to the Cave of the Winds. I watched the four Maid of the Mists perform their daunting journeys rendered neutral by half a century of repetition. I saw the passengers in their blue rain ponchos board from either Canadian or American side.  Through my childhood I'd seen these things, and I had wondered whether I would one day have a honeymoon in Niagara Falls as it seemed every girl used to dream. It dawned on me then. I was on my own kind of honeymoon, the single mother kind.
I was celebrating my life as a mother, the kind of completion that I personally desired. My daughter was now 8 (just turned) and bright and healthy as I could wish. We have great fun together and when it comes time to correct her on anything I just use a couple of bits of sign language, and we're good. I like my job, had nearly finished my third book. I'd arrived at a good place in my life, perhaps the new "bar" that marriage signified for our mothers' generation. While my daughter slept into the daylight and the Falls roared on through their geological magnificence, I sat on the loveseat and loved it all.