Some History of the Basilica 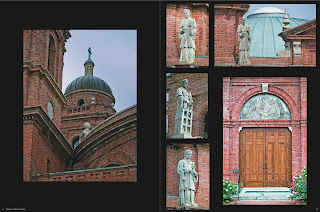 
Some history of the Basilica:


Paul Roebling Jr,  grandson of the designer of the Brooklyn Bridge, (Yes!)  first started development of Haywood Street exactly one century ago with The Haywood Building. At that time, Haywood Street was little more than a ravine running along the base of the resplendent Battery Park Hotel property. This is not the same Battery Park Hotel as the one standing at the north end of the city today. It was a Queen Anne-style green-painted wood and was owned by the Coxe family. Thomas Wolfe spent hours in the lobby watching the guests as they arrived, and he lamented its loss heavily when E.W. Grove purchased the land, razed the hotel and destroyed the mountain it stood on. Both Vanderbilt and Grove first espied their respective mountain real estate legacies from windows of that original hotel.

Guastavino came to Asheville on a commission from Richard Morris Hunt, the first Fine Art architect in the U.S. and designer of the Biltmore Estate. The Spaniard, from Valencia, had devised a method of tiling for which he had secured a patent, a method that revolutionized the making of domes.

Rafael Guastavino, Richard Sharp Smith and James Vester Miller all worked on Basilica of St. Lawrence. This makes it a monument to multicultural and creative collaboration. News of this collaboration has only recently come to light, as is the case with much of Asheville's architectural and social history. The city is still waking from its economic sleep and much needs to be remembered before dashing forward. While Executive Director of the Preservation Society of Asheville and Buncombe County, Martha Fullington spotted Sharp Smith's signature on the blueprints. Other Sharp Smith/ Miller collaborations include YMI, St. Matthias, Hopkins Chapel and many more. Miller was born into slavery and became arguably the most prolific builder in the city during the real estate boom. Each of these men is a legend unto himself. The Basilica is the only structure on which all three worked.

Guastavino died prior to the Basilica's completion and is buried within. His son completed his work. Recently in Manhattan, one of the designer's bridges in lower Manhattan was converted into a restaurant; this means New York traffic was re-directed to preserve his work. Manhattan now features Guastavino's work in tours, including one of the abandoned City Hall subway station. In 1904 NYC Mayor McClennon specifically demanded Guastavino's craftsmanship saying ""My station under City Hall will be more beautiful than the rest." In the Basilica we have the last work of a man to whose work MIT devotes an entire department. The school brought together engineers from Britain and Spain to design a sustainable conference center, Pines Calyx, based entirely on his work.

The Basilica of St. Lawrence was deemed a basilica in 1993 by Pope John Paul II, based on the criteria comprised of liturgical norms, exemplary performance of ritual and compliance with the General Statutes of the Roman Missal. The honor was bestowed, in part, because this is Rafael Guastavino’s only church. By the time he came to Asheville, Guastavino’s American projects included Grant's Tomb, the Great Hall at Ellis Island, Grand Central Station, Carnegie Hall, and the chapel at West Point, the Duke Chapel in Durham, the Jefferson Standard Building in Greensboro, the Motley Memorial in Chapel Hill and St. Mary's Catholic Church in Wilmington, among more than six hundred remaining works around the world and in U.S.

Here is a video celebrating New York's love of its Guastavino legacies.