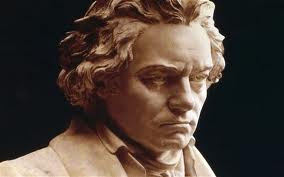 O God! – you have no threefold being and are independent of everything, you are the true, eternal, blessed, unchangeable light of all time and space. . . You are present throughout the whole world and sustain all things.
A translation by Beethoven of Hindu text*

The moon begins below the water, always.
In all things, it begins this way, the left hand the rhythm in
an enduring lunar pulse that pulls and draws,
attracts and yields, however far the right hand ventures
closer to the sun then to return, then to succumb
and venture deeper.
At the wall of the dining room in Lawrence Park, Toronto,
the old, nameless upright stood.
Sheet music ragged, yellowed, the notes blackened
by endless playings, peeked out from inside the wooden bench
like the slivers of sun during an eclipse. The only piece
my mother played was the Pathetique, and its horrible chords
born of the same first material as the moon itself,
as the heart itself, as the soul itself, poured out through the home
drawing everything inside of them, almost as though inside of her
who otherwise was chipper and always home. Home, though,
when she played, was her world, a burgeoning shoulder of genius
edging out the domestic and the doomed.
When my hands could reach an octave I chose to play Moonlight.
Teachers after-schooled me in “Big Chief Crazy Horse” and “See the Bear
on the Two Feet Begging for  a Bite to Eat,” which I played in recitals
wearing a pink dress. But in secret I collected the names of notes, that limited alphabet
of limitlessness, and carried them home to that wall, that piano darker than night
and began the metamorphosis of girl into woman at the age of eight.
It would be my song. My place to put things that never made any sense.
My survival, and after a time, my Joy once I learned to see what Joy is:
something belonging never to us, but only to the soul.
Beethoven translated two passages from Hindu prayer.
The Illuminati dissolved by the time he was 14, he found his own path
to Elysium and scored it with sand and ink, wax and fire. Moving deeper
under the water, he rose. Churned the emotions of the godhead into sound,
he was Arjuna engaging the battle that carries him inward all the way to God.
Each sonata was another move from light to illumination.

For Ode to Joy, Beethoven used the words of a poem by Schiller, an Illuminati text:
Those who dwell in the great circle,
Pay homage to sympathy!
It leads to the stars,
Where the Unknown reigns.

The cannons at the end are the musical equivalent of Bhagavad-Gita
Book Four. But what I hold to, still, what holds me the most, in his deaf
hands lowering me into the water so gently, like a lover who knows
the works of my mind so far down, so sounding me that all the notes
flow inward, it is the Moonlight’s first movement, the depth of inspiration
occluding all surface appearance, that I go into. And it is religion because
of its awful longing that meets the soul below the space it speaks from
and carresses it into light. To play it is dreadfully uncomfortable even
after nearly thirty years. I’m not that good, and it reminds me I’m even
worse, but that’s the lesson of Beethoven. To know perfection is to never
possess it, but to work the hands’ skills as they are given, to when the wrong
note is played not stand and move from the piano to something so much easier,
but to stay. The piano wants to be played, and the wrong note pleases the soul.
Discord pleases the soul so much that Beethoven built the discord into the music.
He left some notes for only the soul to play, for us to encounter it there on the page
and ask, “No, this can’t be right?”And it is right. And the wrong notes
open the questions into minor keys that once corrected are still minor until
the third measure of the second page when the hands land on major
again, and for a moment there is knowing, there is correctness, but there’s
no God. So he descends us. Again. And this submersion is a sequence of
the soul’s work, a beautiful subtraction of the certainty the hands must
learn to play so the heart can walk in this world, unafraid of the unknown.
The unknown takes practice, and the piece therefore is complicated.
To learn to play this, says Beethoven, (me, having written the question
in one of those little notebooks), is to learn how to love.
He didn’t care much for people but gave his life to serving humanity.
“How can I not believe in God when I work so closely with him everyday?” he said.
And that God was the God he bore into using notes like tools for gently
brushing away the cosmos.

Fitting this into a small, antique upright in a dining room, my mother
work flare denim jeans and a black turtleneck. It was Toronto in the 1970s,
and the boatswain whistle hung round her neck, a model for what my parents
saw as a sideline business as my father sought fellowships for research.
The world was disco, but the home was piano. When it was silent,
everything was known and certain and would last forever. Snow covered
the spruce in winter. The spruce re-appeared in Spring. The driveway
was gravel. The house was made of brick. It had Red shutters. The address:
125 St. Leonards Avenue, the patron saint of chefs, captive women, and wounded
animals. French lessons on Wednesdays. Dinner: roast beef on Sunday.
But when she played, the whole of it trembled as the Unknown entered
the house, and taking a seat on the leather couches they brought with us
back from England, spread its arms wide and carried us all down into Heaven.